What does the word “helps” mean in 1 Corinthians 12:28? If God knew there would be sin, why did he make a world in the first place?

Where was the garden of Eden?

The location of the garden of Eden is described in Genesis 2:10-14.

Two of these rivers are well known today — the Tigris and the Euphrates — and run through Mesopotamia to the Persian gulf. Also, we are told that Eden was “in the east” (Gen 2:8) meaning east of Israel. So it was most likely in the Mesopotamian area in modern day Iraq.

The location of the Pishon and Gihon rivers is less certain, although the text provides some hints.

The Gihon “flowed around the whole land of Cush”. This is not a reference to Ethiopia, as translated in the KJV, because Ethiopia is nowhere near Mesopotamia. Instead, it is more likely referring to the area occupied by the Kashshites who ruled Mesopotamia between about 1500 BC and 900 BC.  The Gihon river may be equated with the Karun river in Iran.

The Pishon “flowed around the whole land of Havilah, where there is gold”. Some scholars identify Havilah with southern Arabia, partly because of the gold mines that are still active there. Bdellium is also prevalent in southern Arabia. It has been argued by several scholars that the Pishon refers to a now-dry river that flowed from near Medina, running north west via the Wadi Al-Batin system, to Kuwait. Satellite images of the region allow the ancient river to be traced despite it now being largely concealed beneath sand dunes.

So the most likely location of Eden is where these four rivers come together. 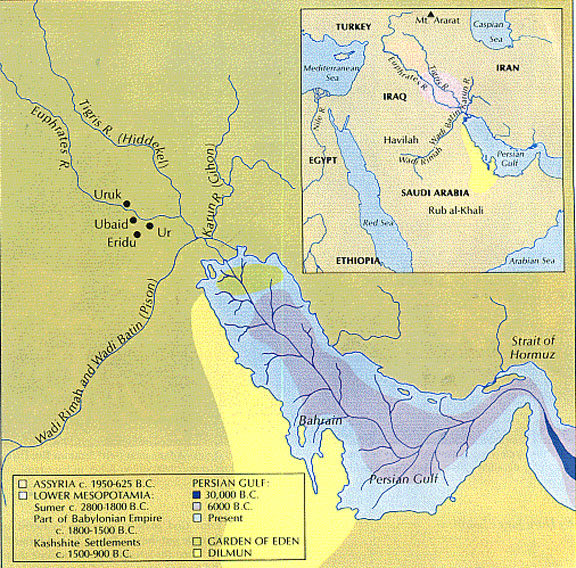 That would place the garden of Eden in the area of Kuwait, or possibly underwater at the head of the Persian gulf.

One potential problem with this analysis is that a river is described as having “flowed out of Eden to water the garden, and there it divided and became four rivers.” The rivers we have considered all flow into the same region rather than out of that region. For that reason, some scholars have looked to the north of Mesopotamia, where the Tigris and Euphrates originate, to find the original location of Eden. The most popular northern site for Eden is at Gobekli, near the ancient city of Haran where Abraham once lived.

Alternatively, we may be trying to make the verse say more than it actually does by interpreting it in this way. It is not clear to me that the verse is implying the direction of flow of the four rivers.

Some interesting articles on the location of Eden: