Who was King Nebuchadnezzar’s son? On what day did Jesus die?

What was the eye of a needle? 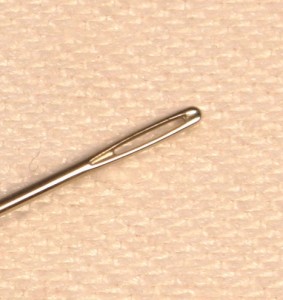 Eye of a needle

He is using hyperbole — deliberate exaggeration to make his point. The eye of the needle is the tiny hole through which the thread goes. Obviously it is impossible to fit a camel through such a hole. So Jesus is saying that, human speaking, it is impossible for rich people to enter the kingdom of God. He goes on to say that “What is impossible with men is possible with God”.

Many people have found this statement of Jesus hard to accept, and so they have looked for alternative meanings. One such speculation is that the “eye of the needle” refers to a small gate in the wall of Jerusalem which camels could just squeeze through. This interpretation was first proposed in about the ninth century, and has been repeated in many commentaries since. However, there is no historical or archaeological evidence that the phrase was applied to small gates at the time of Jesus, or for centuries afterwards. Relatively recently, some gates have been named “Needle’s eye gate”, but the name has come about because of the mis-interpretation of what Jesus meant.

At the time of Jesus, a needle’s eye was simply a needle’s eye, and what Jesus said is easily understood although it may be hard to accept.