Is it permitted to make the holy oil and incense in Exodus 30? What did Adam look like?

Can a person lose favour with God?

…without faith it is impossible to please him, for whoever would draw near to God must believe that he exists and that he rewards those who seek him. Hebrews 11:6

God is pleased when we trust him and believe what he has said. If we want to be close to God we have to acknowledge his existence and his promise to reward those who are looking for him.

God is displeased and angry when people lose their faith in him. For example, when the nation of Israel abandoned God and worshipped idols it says:

…the people of Israel did what was evil in the sight of the LORD and served the Baals. And they abandoned the LORD, the God of their fathers, who had brought them out of the land of Egypt. They went after other gods, from among the gods of the peoples who were around them, and bowed down to them. And they provoked the LORD to anger. Judges 2:11-12

However, this doesn’t mean that if we lose our faith in God we are immediately doomed. It is God’s desire to save us, because he…

…is patient toward you, not wishing that any should perish, but that all should reach repentance. 2 Peter 3:9

If we lose favour with God it is because we have lost our trust in him. We can always turn back to him. God may be displeased with us but he still loves us. Jesus tells a parable about this in Luke 15, it is known as ‘The Prodigal Son’[1]. The parable is about a son who receives his share of his father’s wealth and leaves home to squander it all on reckless living. In the parable God is depicted as an ever-loving father, who runs to embrace his child when the son repents and returns home.

If we lose favour with God, he is always waiting for us to return home. 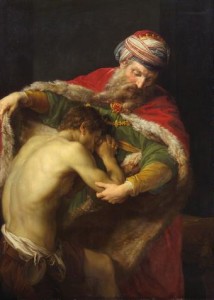 The Return of the Prodigal Son (1773) by Pompeo Batoni

[1] A more fitting title would be ‘The Lost Sons’ or the ‘The Loving Father’.
Tagged with → faith • God • repentance
Share →
Tweet